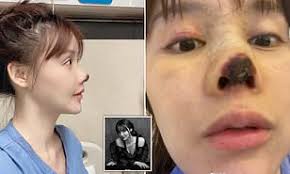 Liu, a young singer and actress who has starred in multiple films and TV programs and was considered an up-and-coming star in China, had gone off the radar in recent months, which led many to speculate about her well-being.

Earlier this month, the actress took to her Weibo account to explain that her unexpected absence had been caused by a botched nose job which had resulted in part of her nose tissue actually dying and falling off.

Gao Liu also shared photos of her “plastic surgery nightmare“, which sparked an online debate about cosmetic surgery, which has become very popular in China in recent years.

“The entire procedure lasted four hours. I thought that in these four hours, I would be made more beautiful,” Gao Liu told her social media followers. “I didn’t expect these four hours to be the beginning of a nightmare.”

The actress said that she turned to plastic surgery thinking that it would help boost her career. A friend introduced her to a plastic surgeon back in October of last year, and after visiting a clinic in the city of Guangzhou, she was advised to get “a slight trim”.

Gao Liu claims that, before agreeing to go ahead with the nose surgery, she was told that she would be able to go back to work in a matter of months, only the reality turned out to be much different. After the four-hour procedure, her nose felt tingly and irritated, and repeatedly became infected, until necrosis set in.

“The skin on the tip of my nose… became darker and darker, and my nose became necrotic,” Liu said, adding that she needed two months of hospitalization, and lost around 400,000 yuan ($62,000) in contract work. Worse still, the damage to her nose was so extensive that she won’t be able to undergo reconstructive surgery for at least a year, until the tissue heals completely.

Following Gao Liu’s revelations, Chinese news website The Paper started an investigation, and learned that the clinic that operated on the actress had received five administrative penalties between March and October 2020, although the reasons were unclear.

This is not a unique situation apparently, as official data shows that in 2019 “the number of unqualified plastic surgery clinics exceeded 60,000, six times that of regular clinics.” That number is believed to be even higher now.