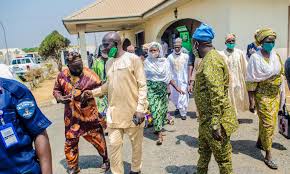 A Chartered Accountant , Business Consultant and Astute Politician, Mr. Taiwo Olasupo on Tuesday 9th February embarked on House-to- House awareness and sensitisation tour on Lagos Island East Local Council development area to assemble Residents and members of the All Progressives Congress, APC to participate in the ongoing registration and revalidation exercise across the country.

In his determination to make the exercise hitch free and successful in the Premier Local Government Area, Olasupo deployed a Team of professionals and field officers to mobilise and monitor the exercise across the Ten (10) Political Wards in the Lagos Island East Island LCDA.

Citizen NewsNG/Citizen Magazine  also gathered that Olasupo provided logistics and Supports for the exercise to ensure a seamless task. A Professional Photographer is stationed at each Ward to capture the passport-size  photographs as part of the requirements for the exercise. Light Refreshments were distributed.

While responding to questions from Citizen Magazine/Citizen NewsNG shortly after the Revalidation of his membership of the All Progressives Congress, APC, Olasupo stated that; “The supports in the areas of membership mobilisation, sensitisation and provision of logistics have become necessary to compliment the efforts of our Party and ensure an all-round success” during and after the exercise.

Olasupo outlined the significance of the exercise to include but not limited to Proper documentation of registered members, Planning and Research purposes, new membership drive and growth.

“So far, we have witnessed a massive turnout. Though, some hitches were recorded but we look forward to a successful exercise. it is a Unifying mechanism that will foster oneness  among Party members for the development and continued  acceptability of our great party in Lagos and across the country”, Olasupo explained.

“At this point, I restate my Unflinching loyalty and support for our party,  the All Progressives Congress, APC. I also urge every member to shun divisive tactics.
We are an indivisible Progressives family”, Olasupo said.

At Ward D2/D3, Popo Aguda Quarters, a Peoples Democratic Party, PDP member, Mr. Lateef Adetunji led scores of Residents to defect to the All Progressives Congress on the second day of the exercise.

Speaking on behalf of the newly defected members, Adetunji  said;  “Today, We are leaving and rejecting the Peoples Democratic Party to join the Progressives Party, the All Progressives Congress, APC. This is in recognition of the Political ideology and masses-driven policies the APC offers and qualitative governance the State Government had delivered in the last twenty one months”.

At the Lafiaji Community, Citizen Magazine/Citizen NewsNG reported that the All Progressives Congress Membership Registration and Revalidation Exercise also witnessed a large turnout of members and non-members.

Olasupo eulogised the Leadership qualities of the National Leader of the All Progressives Congress, Asiwaju Bola Ahmed Tinubu.

“Asiwaju is a Selfless Leader, a Man of vast Knowledge and Experience. An Excellent Manager of Man and Resources. He is a Unifying Force across the Niger. Our Leader’s Contributions to Nation building and Nigeria’s nascent democracy cannot be quatified. Indeed  he’s a Father and Role Model to me and many other Progressives across the country and beyond”,  Olasupo said.