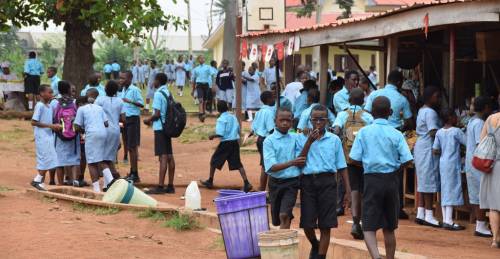 Oyo State Governor, Engineer Seyi Makinde, has directed the immediate closure of all schools in Ibadan beginning from Wednesday, 21 October 2020,  in view of the prolonged #EndSARS protests rocking the state capital.

The governor, in a state broadcast aired on the Broadcasting Corporation of Oyo State (BCOS), stated that the closure of the schools will be reviewed on Friday, October 23,  2020.

The governor equally announced the deployment of operatives of the ‘Operation Burst,’ a state-backed security outfit comprising soldiers, men of the Nigeria Security and Civil Defence Corps (NSCDC) and the Nigeria Police, to all flash points of violence in Ibadan, the state capital, to restore normalcy and maintain peace.

He further explained that the decision to close schools and deploy men of  the ‘Operation Burst’ was a result of the new dimension the ongoing #EndSARS protest was taking, adding that hoodlums have started taking advantage of the protests to harass citizens, perpetrate uncivil acts and disturb residents from carrying out their legitimate businesses.

A statement by the Chief Press Secretary to the governor, Mr. Taiwo Adisa, indicated that Governor Makinde further noted that operatives of the ‘Operation Burst’ would continue to be on ground to protect legitimate and peaceful  protesters, warning, however, that the state would not allow unscrupulous elements to hijack the protests and terrorise residents of the state.

He maintained that as part of the state government’s determination to protect peaceful protesters, it had earlier deployed operatives of the ‘Operation Burst’ to certain parts of the state to protect protesters, saying that the development enabled the protesters to express their legitimate grievances unhindered.

Governor Makinde had, in the wake of the protests a little over a week ago, deployed operatives of ‘Operation Burst’ to Ogbomoso town to maintain peace following an outbreak of violence.

The outfit was also charged to take the responsibility of protecting protesters, while the police were told to step back from protest venues.

But in his broadcast on Tuesday, Governor Makinde expressed worry that some hoodlums had been preventing residents of the state from going about their lawful businesses in the name of the protests.

He asked residents of the state to dial the state’s emergency code 615 in the case of anyone trying to foment trouble or bar them from carrying out their legitimate businesses.

According to the governor, his government has shown that it is committed to redeeming the pledges he made while addressing the protesters last week, adding  that as he promised, the Ministry of Justice of the state has withdrawn cases against arrested #EndSARS protesters, while those in custody have been released.

He added that the government has also set up platforms for reporting past and present incidents of police brutality and injustice, urging residents of the state to trust the process and rest, assured that justice would be done, rather than resorting to violence, which, he said, could be counter-productive to the cause of the protests against police brutality.

The governor said: “I address you at this time to talk about some of the issues that have been thrown up by the EndSARS protests in Oyo State. I have always said that peaceful protests are an important part of our democratic process, and that no one should be harassed or brutalised for protesting.

“For this reason, we deployed members of ‘Operation Burst’ to protect protesters. And we are happy to report that there have been no cases of disruptions of protest grounds in Oyo State since they started work.

“However, the past two days have seen a new dimension to the ongoing protests. Thugs and hoodlums have taken advantage of the situation to perpetrate uncivil acts and harass citizens who are going about their day-to-day activities. Some thugs are going as far as forcing people who have businesses open to close shop and join in the protests. We know these are criminal elements. And so, as a state, we must act to protect the citizenry.

“Therefore, we are deploying members of the ‘Operation Burst’ to various hotspots in Ibadan to arrest the situation and restore normalcy. The members of the team will continue to protect genuine protesters and their right to protest. But we cannot allow persons with ulterior motives to hijack the protests.

“We remain committed to the process of meeting the demands of these protests. Already, as promised, the Director of Public Prosecution, Ministry of Justice, Oyo State, has withdrawn cases against EndSARS protesters, and those in custody have been released.

“Also, the Oyo State Government has set up platforms for reporting past and present incidents of police brutality and injustice. This will naturally pave the way for the next steps in our quest to get justice for the victims. I urge the good people of Oyo State to trust the process that we have set up and rest assured that every case will be pursued to a logical conclusion.

“I have directed that all schools in Ibadan should be closed from tomorrow, Wednesday, October 21 2020 for the rest of this week. The situation will be reviewed on Friday, October 23 2020, and then further directives will be given.

“Please call 615 should anyone attempt to disrupt your legitimate business activities.”

“Let me also use this opportunity to call on members of the Nigeria Police Force to remain professional in the discharge of their duties as they will be held responsible for their actions.”

Squid Game: Parents are urged by the English council not to allow children to watch the show after reports of young kids copying the game in the school playground.