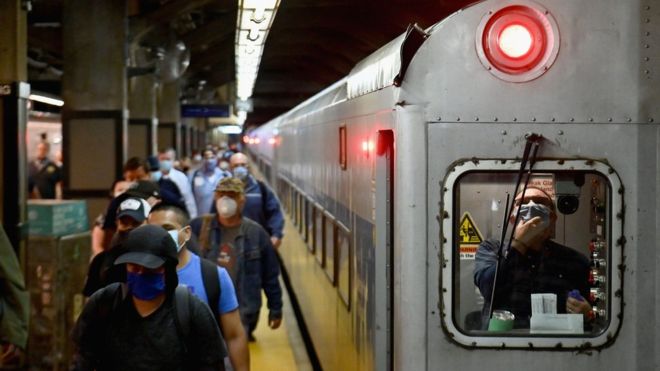 Global stock markets have fallen amid fears that an uptick in coronavirus cases could cause more economic damage.

The declines came after the US Federal Reserve warned that the American economy faces a long road to recovery.

In the US, the three main share indexes saw their worst day in weeks, with the Dow Jones Industrial Average down almost 7%.

The falls followed a weeks-long rally that had helped shares recover some ground from the lows seen in March.

Energy and travel stocks were among the biggest losers, as global crude oil prices also took a hit.

Earlier, European shares also dropped, with the UK’s FTSE 100, the Dax in Germany and France’s CAC 40 all losing 4% or more.

“Government, companies and people would be better prepared for a second wave than for the first one,” said Roland Kaloyan, European equity strategist at Societe Generale.

“But the problem is there is a limit to governments injecting money.”

Slow recovery
Share prices had gained in recent weeks amid hopes that the economy would rebound as authorities loosened restrictions put in place to try to slow the spread of the virus.

Last week’s surprise report showing US employers had restarted hiring in May helped to push the tech-heavy Nasdaq index to new highs.

But the recovery remains tentative. On Thursday, the US Labor Department reported that another 1.5 million people had filed new unemployment claims last week. More than 30 million continue to collect the benefits, it said.

US Federal Reserve policymakers said on Wednesday that the unemployment rate could remain above 9% at the end of the year – close to the worst level of the financial crisis,

At a news conference, Fed chairman Jerome Powell warned that this assessment may prove optimistic, if coronavirus infection and hospitalisation rates rise.

Several states that have moved to reopen, including Arizona and South Carolina, have seen an uptick in Covid-19 cases in recent days.

“It could hurt the recovery, even if you don’t have a national level pandemic. Just a series of local ones, of local spikes, could have the effect of undermining people’s confidence in travelling, in restaurants and in entertainment,” he said. “It would not be a positive development.”

US Treasury Secretary Steven Mnuchin said he did not want to see a return of the lockdowns that had kept the world’s largest economy frozen for weeks.

But economists have warned that people will stay at home voluntarily if they are afraid of becoming ill.