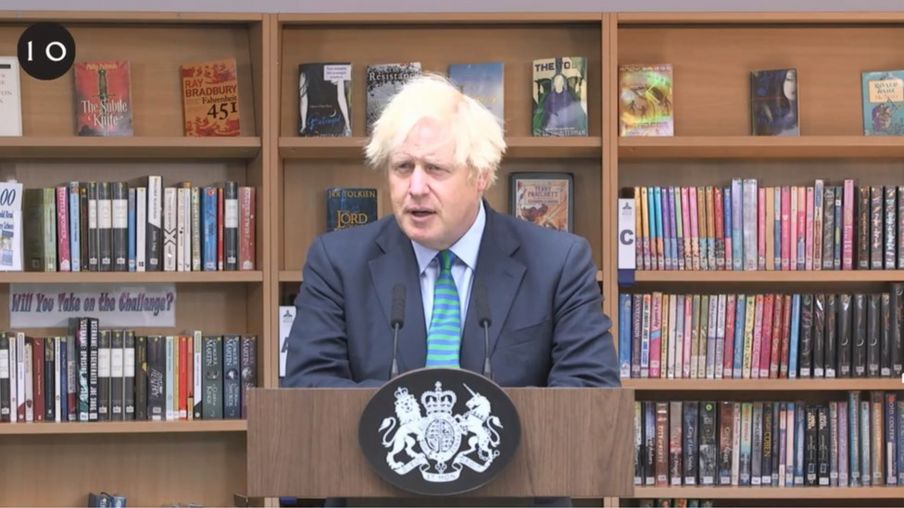 A former school librarian has said she “feels sorry” for Boris Johnson after a book display intended as a message to her former employers ended up making waves on social media.

The titles – which included Roald Dahl’s The Twits – were spotted behind the prime minister during a visit to Castle Rock School in Leicestershire.

Some suggested the display was a mischievous dig at Mr Johnson.

The school said the library “stocked a wide range of texts”.

“It was a message for the management team, not for Boris Johnson. I did feel sorry for him,” said the 48-year-old librarian from Leicestershire, who wants to remain anonymous.

She said she had left the Coalville school six months ago after requests for more support in the library were not acted upon and admitted displaying the titles along the top shelves during her last week at the school in February.

The books that were visible behind the prime minister included Farenheit 451 – a dystopian novel about a society where books are banned – as well as titles including The Subtle Knife, Glass Houses, The Resistance and Betrayed.

“It pleased me and gave me a bit of satisfaction that I was sending a secret message to management. I didn’t expect them to notice or work it out,” the former librarian added.

She said she could not have predicted that, six months later, the prime minister would make a speech using the library as a backdrop.

“I appreciate it has made a lot of other people happy and it did make me smile,” she said.

Mr Johnson’s speech to Year 11 pupils on Wednesday was broadcast live on 10 Downing Street’s Twitter account, during which he blamed a “mutant algorithm” for this year’s exam results fiasco.

Nicholas Pegg was among the first to spot the book selection and tweeted: “Supreme trolling from the school librarian.”

Others also commented about the background.

Castle Rock head of school, Michael Gamble, said: “We have wide range of texts available in our library, some of which challenge our young readers.

“The library assistant left in February, prior to lockdown, during which time the library was unused.”