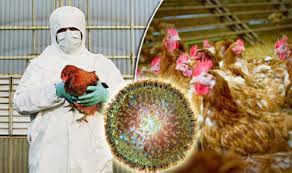 Avian Influenza, a highly contagious viral infection of birds, has resurfaced in Nigeria, the Director of Veterinary and Pest Control Services in the Federal Ministry of Agriculture and Rural Development, Abuja, Olaniran Alabi, has revealed, Mr Alabi disclosed this on Wednesday.

Avian Influenza, also known as bird flu, causes up to 100 per cent mortality in domestic chickens or turkeys.

The disease is caused by a virus that belongs to the family Orthomyxoviridae.

It is mainly found in birds but under certain circumstances, infections can also occur in humans but the risk of transmission is considered low.

The transmission arises through direct or indirect contact between infected and susceptible birds due to the inhalation of the infected droplets released through saliva, faeces, and nasal secretions from infected birds.

Birds can also be infected through contact with a surface that is contaminated with virus from infected birds.

In recent years, there have been reported cases of avian influenza in the country.

Also, the country was the first to report human cases of avian influenza in West Africa, a year after the first outbreak in poultry farms.

The only human case of avian influenza in Nigeria was detected in Lagos state in January 2007 and was officially reported in February of the same year, according to Lagos State Ministry of Health.

In January 2015, the resurgence of avian influenza was reported and confirmed on a commercial farm and in live bird markets in Kano and Lagos States, according to the Federal Ministry of Agriculture and Rural Development (FMARD).

Since the resurgence of the virus reported in 2015, the viruses have circulated in the country and reported in 25 states out of the 36 and the Federal Capital Territory (FCT).

This has led to the death of an estimated 332, 488 birds so far, according to the Food and Agriculture Organisation (FAO).

In January 2019, an outbreak of highly pathogenic avian influenza was reported to have affected five to three weeks old layers in a backyard poultry farm in Bauchi state.

After confirmation of the virus, the epidemic spread to Plateau State where six outbreaks were confirmed in two local government areas of the state.

Again in December 2019, the disease occurred in a commercial farm in Bauchi, sick birds from the affected farm were dispatched in live bird markets but the disease was not reported to the state veterinary, according to FAO.

According to the new statement, after two years of no reported outbreak in the country, highly pathogenic avian influenza has been detected again in the country.

“Additionally, within a space of one week, outbreaks have been confirmed in two commercial farms in the state and another in Jos, Plateau state.

“This indicates that the disease is rapidly spreading to other states,” the statement said.

FMARD surged all the parties in the poultry industry the need to curtail further spread in the country.

It said, Iin view of the devastating nature of the disease to the poultry industry with serious socio-economic impact on the livelihood of farmers and other poultry value chain operators, there is need to put in place proactive measures to curtail further spread of the disease.

In the statement, the ministry listed the measures to curtail the spread of the disease in all the states including FCT.

“Consequently, the following are recommended for implementation in all states of the federation including the FCT.

“Enforcement of movement control of poultry and poultry products from affected to non-affected states.

“Sensitisation of poultry farmers and other value chain operators on basic biosecurity and hygiene measures for prevention and control of the disease.

“Separation of live bird markets (LBMs) for poultry from the LBMs for domestic fowls and other bird species such as duck, captive wild water birds etc and also sustained and vigorous disinfection of Live bird market in the states,” the statement said.

In the statement, Mr Alabi urged all the state directors and FCT to be on the alert with intensified bio-security measures to avert the spread of the deadly disease.

“While reiterating the need to be on red alert, I look forward to your utmost cooperation and collaboration in the fight of this deadly disease,” Mr Alabi said in the statement.