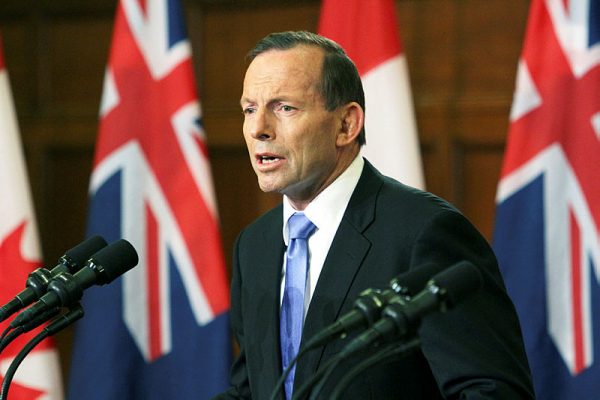 Ministers have defended former Australian PM Tony Abbott amid reports that he is being lined up for a role in post-Brexit trade talks.

Labour leader Sir Keir Starmer said he had “real concerns” and “wouldn’t appoint” Mr Abbott if he were PM.

Mr Abbott says he has had talks with UK ministers about a role but it has yet to be officially confirmed.

Opposition and some Tory MPs say he is unfit to represent the UK due to his views on climate change and past “misogynist” and “homophobic” comments.

Mr Abbott’s position would be as a member of the UK board of trade, a panel of experts that is being put together to advise International Trade Secretary Liz Truss.

Asked about the potential appointment in the Commons, Mr Hands said: “No appointments have been confirmed, but personally I welcome the fact that a former prime minister of Australia is willing to help this country out.”

Mr Hancock said he did not believe Mr Abbott is homophobic or misogynistic, and when pushed, he added: “He is also an expert on trade.”

Reports that Mr Abbott, who was Australia’s prime minister between 2013 and 2015 is being lined up to work alongside Liz Truss have been met with anger from UK opposition parties and some Conservative MPs.

Sir Keir Starmer said: “I have real concerns about Tony Abbott, I don’t think he’s the right person for the job. If I was prime minister, I wouldn’t appoint him.

Scotland’s First Minister Nicola Sturgeon said Mr Abbott’s coronavirus views are “deeply offensive and wrong” and he is not fit to be a trade envoy.

“But Tony Abbott, before these comments, is a misogynist, he’s a sexist, he’s a climate change denier,” she told Sky News.

“Trade, in many respects, should reflect our values – there should be ethics attached to any country’s trading profile.”

International Trade Secretary Liz Truss was later asked in the Commons about the possible appointment.

“This is a party that has never elected a female leader despite having the opportunity time and time again.

“The reality is they’d rather virtue signal and indulge in tokenism rather than take real action to improve the lives of women.”

“So does this indicate the government is moving away from any commitment in trade deals to maintain environmental protection? And if not, why have you put him in the job?”

Ms Truss replied: “The reality is that those on the left of politics are always intolerant of anyone who doesn’t agree with them but are prepared to defend anything from their own friends.”

Conservative MP and chair of the Commons foreign affairs committee Tom Tugendhat was asked about the criticism of Mr Abbott.

Speaking on 24newsreads.com News, he said: “I would like to see people from the United Kingdom representing the regions and nations.

“Businessmen, politicians and industry leaders from Scotland, Wales, Northern Ireland, and the different regions from Cornwall and Kent and wherever else in between, making the case that isn’t simply trade based on a few narrow industries.”

Mr Abbott who led Australia’s Liberal Party between 2009 and 2015, was challenged about some of his past comments at a hearing of Mr Tugendhat’s select committee on Tuesday.

Labour MP Claudia Webbe quoted remarks attributed to him in 2012, that men were by physiology or temperament, more adapted than women to exercise authority and issue commands, and asked if, in the light of that opinion, he would have difficulty accepting the authority of Liz Truss.

Mr Abbott said he “wasn’t sure” he had ever used those words, and that it “doesn’t sound like anything I’ve said”.

The former Australian prime minister is said to have struck up a friendship with Boris Johnson when he was foreign secretary.