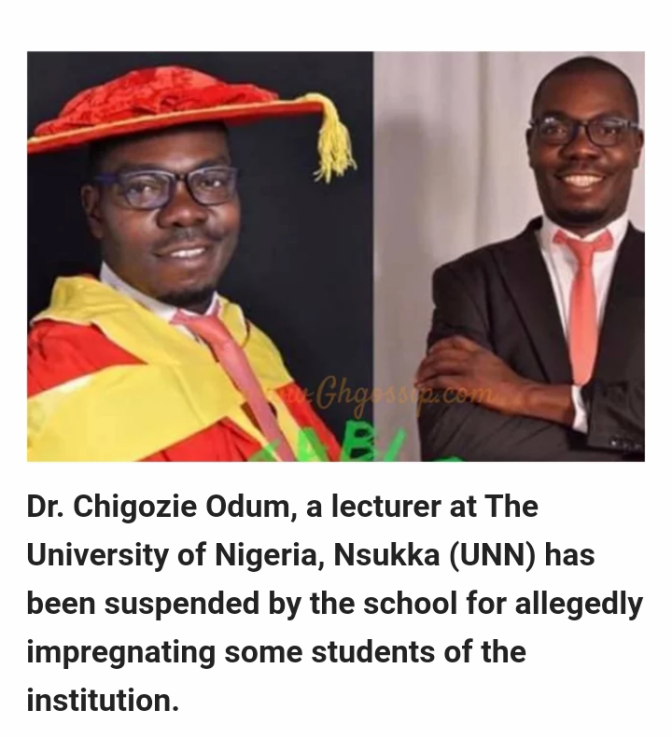 The University of Nigeria, Nsukka (UNN) has suspended its lecturer recently arrested over allegations of impregnating one of his students.

Dr. Chigozie Odum, the accused, a senior lecturer in the Archeology Department, was arrested by the police for allegedly impregnating a student and threatening her life.

Following a petition from the family lawyer of the female student, men of the Crack Squad, Enugu State Police Command arrested the lecturer in Nsukka and moved him to Enugu.

The lecturer has now been suspended indefinitely.

A letter to that effect, dated February 15, was signed by Mrs. Achiuwa F.C., the deputy registrar of the University.

“Following the accusation of sexual harassment made against you by a female student in the Department of Archeology and Tourism, the Vice-Chancellor has directed that you be suspended from duty immediately. You are hereby so suspended from duty with immediate effect” Achiuwa said in the suspension letter

“You should stay away from your duty post until the final determination of the allegation against you. You should handover any University property in your custody to the Head of Department of Archaeology and Tourism.

The Bursar is by a copy of this letter advised to place you on half salary pending final disposal action on your case.”

“Yes, the suspension letter emanated from the management of the school,” Omeaku said.

He stated that the lecturer’s suspension did not emanate from his arrest, but that the school was already investigating allegations against him after it was brought to its knowledge by the affected student.

“The school had earlier set up a committee even before the matter was made public. It is not true that the University refused to act on the petition. A case has been established against him and the only way to instill discipline is to suspend him and continue with further investigations,” Omeaku said.

He added that further sanctions may be made against the lecturer after investigations.

On allegations that the said lecturer had impregnated three other students before now, he stated that “if they come up and say so, we will deal with it. But at the moment, we are battling with the case at hand.

“The other claims are not to my knowledge. If other people can come with evidence, riding on the fact of the first victim that was named that led to the suspension, the school will not keep quiet. If other people will come with other evidence, it will determine the gravity of punishment or whatever decision that management will make. It is also going to follow due process,” Omeaku said